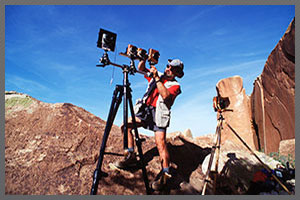 The fine-art photographs of Lorran Meares have been selected for numerous exhibitions across the country, including the Art Institute of Chicago; MIT Creative Photography Gallery; Visual Studies Workshop, Rochester, New York; Memphis Academy of Art; New Orleans Museum of Art; and Schwayder Art Gallery, Denver. These complex images have been published widely in photographic textbooks and journals as well as in well-known magazines and as solo calendars.

Meares has been commissioned by—among others—the American Museum of Natural History, the National Park Service, the Bureau of Land Management, and Sierra Club.

For more than three decades, Meares has been pushing the boundaries of light-painting photography to create mythical, mystical and, often, archetypal images exhibited both traditionally in two-dimensions as well as in stereoscopic three-dimensional installations. Developing fresh approaches to these techniques earned Meares international recognition and inclusion in the Macmillan Biographical Encyclopedia of Photographic Artists and Innovators.

Retired college instructor, lecturer, workshop presenter and a frequent recipient of fellowships, grants and awards, Meares is an outspoken advocate for the environment and for the protection of cultural heritage and places sacred to indigenous peoples. For many years, he has worked in cooperation with the Department of Interior, state parks, the Bureau of Land Management, the Sierra Club and Native American tribal groups on special projects documenting endangered sites. For the past ten years, his efforts have expanded to Latin America and cultures threatened by unchecked development.

In 2003 The Museum of New Mexico mounted a traveling solo-artist exhibition of his interpretive landscape photographs. Nationally published articles and his appearance on the NBC Nightly News with Tom Brokaw underscore Meares‘ commitment to create images that speak for the need to protect Sacred Places and cultural tradition. A resident of Tucson, Arizona, Meares and his life partner, Charlotte, authored Weaving the Scarlet Macaw, an art book about the world-class woven artistry of the Wounaan people of the Darién Rainforest.

For a current resume of Education, Professional Experience, Publications, Exhibitions, Grants and Awards, follow this link.